Opinion – Senator Gillibrand should apologize to NY moms, their children and probably resign.

A small update: As this opinion page is being spread around we’ve noticed Facebook is presenting various titles and descriptions. Take them with a grain of salt as they are not under our control. This this blog is not intended for political attacks (we think all politicians are nuts except the moderates) and when we find something we believe is important, we will post an opinion on it. In this case it’s the mysterious Hillary Clinton selected senator from NY and her “progressive” legislation.

When it became apparent Common Core was hurting children, parents began to seek help from their elected officials. In fact, members of the group Stop Common Core In NY and many others have been frantically calling Senator Gillibrand’s office, writing letters and commenting on her Facebook pages. To date, she has allegedly ignored them and countless others who requested her official position, assistance and relief from the various abuses of Common Core.

Below are a few choice comments from her Facebook page (there are hundreds if not 1000’s more on other pages):

These these women and taxpayers were begging for Senator Gillibrand’s guidance and relief while likely being unaware that she seems to have had a leading role in Common Core. 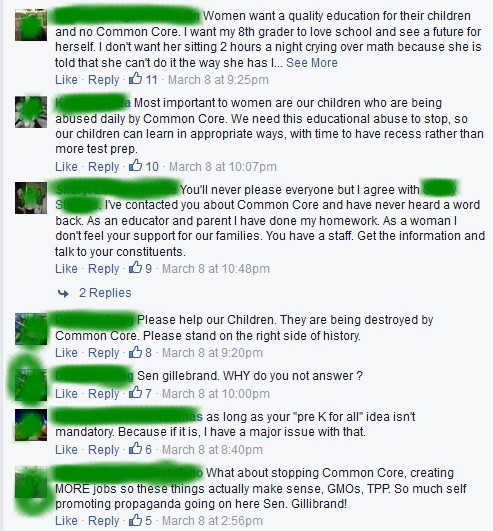 Sen. Gillibrand apparently wasn’t responding to the cries for help.

Like the ladies above we wondered where Senator Gillibrand stood on the issue of the Obama administration’s education initiative. For over a year we’ve watched for any clue to her position from the press. In that quest, we’ve been Googling her name + Common Core every few months and the results have always turned up stories where she would use the words “common” and “core” in different sentences but never addressing the program.

As of today, Nov 6th 2014, something changed since our last search (September) and Google is now prominently listing an old press release where Sen. Gillibrand is introducing her STEM focused initiative called “Voluntary Science and Mathematics Standards Act” and the “National STEM Education Tax Incentive for Teachers Act”. At the bottom of the document she touts support for the “American Standards Incentive Fund” which is/was a Department of Education grant program to encourage states to support Common Core Standards. All of these program descriptions appear to match the Race To The Top Program.

To strengthen our students’ performance in science and technology, Senator Gillibrand is introducing the Voluntary Science and Mathematics Standards Act. The legislation would:

Politicians sometimes make laws that have negative effects and Common Core appears to be one of them. In most cases, the people who passed a bad law own up to their mistakes and attempt to correct the problems or repeal the law. In this case the Senator knew a significant amount of information on Common Core and the changes in education these women were seeking relief from. To paraphrase a distraught mother and educators comment, “you have staff to look into Common Core”.

Gillibrand’s staff could have assisted her in defending her legislation and explaining her support, yet she chose to hide by declining to acknowledge the pleas or disclosing her leading role in the matter. From our perspective, very few people fighting Common Core knew what her position was or if she was willing to do anything about the problems. If anything, she could have directed her distressed constituents to her press release without comment. At the very least, these women would then have known where Gillibrand stood and perhaps stopped seeking help from her.

In conclusion, Mr. Astorino had a better plan for education and perhaps he should be senator. At least he knows exactly what his children and every other non-private school student and their parents are going through. During his campaign, he listened to the people while she apparently couldn’t be bothered to acknowledge her own legislation. For that… she should pack her things and leave NY politics. Good or bad, we need people who will defend their ideas and actions.